A day at the races – the Circuit Paul Ricard

For many holiday destinations there are a few ‘must do’ activities or specific places to visit. Here in Provence we’re lucky to have our very own destination venue – The Circuit Paul Ricard Race Track! This incredible complex and homage to motor racing was built in 1969 just outside of the picturesque village of Le Castellet by Paul Ricard, the drinks magnate who created Ricard, an anise and liquorice-flavoured aperitif in 1932 (it’s delicious – if you’ve not had it then try some when you’re next on holiday in Provence!).

The new circuit opened in 1970 taking just 10 short months to construct and quickly became the premier venue for French motorsport securing the French Grand Prix which it hosted from 1971 for 14 years (more on the Grand Prix later!).

The track was built alongside its very own airfield that was also owned by Paul Ricard (who in addition to a racetrack and airfield added two private islands to his list of assets during his lifetime). The easy access and warm climate meant it quickly became a popular testing venue for motor teams around the world. It was also renowned for being one of the safest tracks around due to the iconic red and blue stripes that instantly make this track so recognisable. 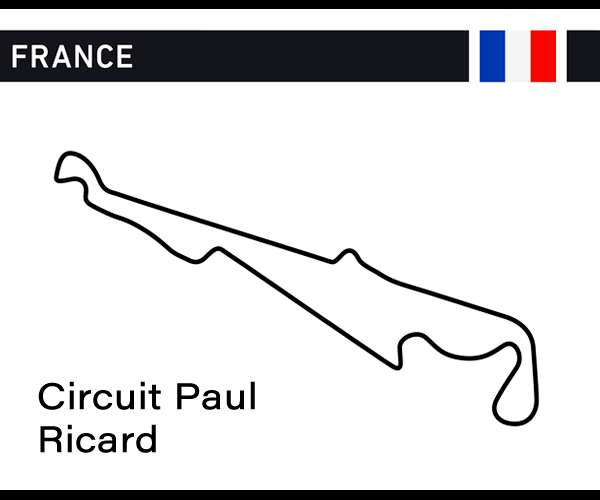 As well as being visually arresting, they act as high grip areas and replace gravel traps of old as a way of slowing vehicles which run off the track. A number of other safety features meant that the track was recognised in 2007 when the Institute for Motorsport Safety bestowed the First Centre of Excellence award on the circuit.

One of its most famous features which can clearly be seen from aerial photos is the mile long stretch of track known as the Mistral straight. This fast run terminates in the Signes corner… not for the faint-hearted driver!

It offers a perfect opportunity to take a holiday in this wonderful area of Provence. Book a villa or hotel for a week or even two and take the time to enjoy exploring the region, tasting some fabulous foods and wines as well as making the most of a front row seat for the Grand Prix itself. Needless to say, the event is hugely popular so book tickets and accommodation as soon as you can.

Track days and other events

Whilst the Grand Prix is without doubt the highlight event of the year, the circuit has a busy events calendar which runs throughout the year. Check out the Circuit website calendar for full details.

Track Days are offered as well when you can take your own car or motorbike out on the circuit after which you’ll be invited to enjoy a lunch buffet In the Panoramic Club restaurant.

Go Karting has been a popular entry point into the world of F1 for many years. If you want to try your hand at some high speed laps then taking a Go Kart around the specially designed Paul Ricard Circuit kart track might be for you. It’s great value as well at just 20 € / person for a 10 minute session.

There is also a dedicated Go Kart training circuit for children aged 7 to 15 years. Full courses are offered for children where they are taught the basics of driving from an early age. You could consider dropping the kids off for their karting session before you yourself head to the main circuit for a GT Driving Course.

Not only in the main circuit a big lure for visitors to the region but the Circuit Paul Ricard also owns an adjoining park called Xtreme Park which offers a massive range of activities for adults and children alike. Try out driving simulators and quad bike rides before heading to the adventure park which has breath-taking zip lines between circuit and sea, a free fall jump tower and a climbing wall.

Xtreme Park is also the meeting point for guided tours of the main circuit itself which are well worth going on. Your guide will take you to the most important places of the Paul Ricard Circuit allowing you to see the paddocks up close, the lobby of Pit Building and the Media Centre whilst learning about the history of the circuit.

You can easily occupy a full day at the Circuit on non-race days and for those who love their motorsports I have no doubt will happily enjoy more time on top. A fantastic destination for the whole family!

Su Stephens is Owner of Olives & Vines. Olives & Vines is a luxury holiday company based in the South of France offering stays at their beautifully designed holiday house and boutique hotel in Le Castellet.

5 reasons you must visit Zakynthos this Summer

Top 5 souvenirs to get only in Iceland

What is the hotel experience like now and after COVID-19?

Explore the White Desert in Egypt

Brilliant group activity ideas while staying in at your private villa

Wildlife documentaries you must watch in lockdown

Photograph of the week: Matera, Italy

Top 5 souvenirs to get only in Iceland

What is the hotel experience like now and after COVID-19?